Shay Carl is one of the people I’ve never heard of prior to his appearance in Tim’s podcast. He is part of the world that I know nothing of – YouTube celebrities. Of course I use YouTube – but it’s to watch videos about specific topics like movie reviews, correct way to exercise, Rhonda Patrick’s discussions with scientists and so on.

I was absolutely oblivious of the world of people who film their lives and just post it online, despite the fact that it is now a well paid full time job for more than a few of them. I have to be honest – I watched a few Shaytards videos and concluded that it’s not really for me. But they have more than 2 billion (!) views so obviously there are people who enjoy it very much.

Even though I am light years away from Shay’s way of life, I can appreciate some of his methods and suggestions.

The one that I remember the most is how he explained why the company he co-founded, Maker Studios, “grew like wildfire”. What was the magic trick how they were able to build a company that was bought over by Disney for $1 billion? 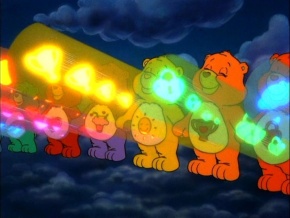 The force is strong with Care Bear Stare

Believe or not, but it was the Care Bear Stare. When people with skills and passion come together, they will create energy which is much stronger than if they would be working separately – the same way as Care Bears link together into Care Bear Stare by “finding their center, focusing their emotions and forcing the energy out of their symbols”.

Again, this is a statement from “Captain Obvious” book. But I am introvert and quite an individualist person, and sometimes I forget that the easiest way how to achieve goals and learn more can be to find people who have similar interests and work with them to overcome obstacles, learn from each other, and motivate each other. Pleasant side effect is that you get to spend time having fun with smart and interesting people.

This is quite out of my comfort zone, but that’s what I was after, right? Libertarians, life hackers, bio hackers, acro yogis, here I come!

(Apparently Shay was caught “cheating” on his wife through text and possibly video. It’s funny (and very meta) how the YouTube feed seems to be full of other YouTube celebrities or wanna-be celebrities commenting on it.)