I took a short break from Titan Experiment during last 2 weeks – that was because I was on a 2 week business trip to USA and then a few more days in India, both with quite a busy schedule. On top of that I used the opportunity of being in USA to fulfill my dream.

Raise your hands if you never wanted to be an astronaut!

As a little girl I didn’t care much about princess fairy tales. Many of my favorite childhood stories were about people going to or coming from space. Later I became a fan of sci-fi in general, dreaming about going to space, wondering what the other life forms might be.

Later I stopped dreaming. Nothing was happening with space exploration. Or so it seemed.

Roughly 2 years ago 2 things happened. I read the brilliant Seveneves by Neil Stephenson, and my friends took the vomit comet which made me decide to take it myself in 2017.

Seveneves is a story about Earth that gets death sentence to be executed in 2 years. Humankind is quickly trying to use all the available and not-available-yet-but-hurry-up technology to get as many people as possible in space.

Neil Stephenson is a literary prophet. Just read his Snowcrash or Diamond Age – he wrote about technologies that very few thought about in early 1990, but are a reality now (I’m still waiting for franchise states). If he’s right in Seveneves, I can assume that space travel will be here sooner than I would ever expect.

And what the hell is vomit comet?

You’ve probably heard about the private space travel costing millions of dollars. That is true. But for much less (~5k USD) you can experience parabolic flight – which is the same thing that NASA astronauts-in-training experience do when they train for their space missions.

2 years ago NASA outsourced parabolic flights to a private company.

And this private company (Zero Gravity Corporation) is happy to sell the same service to you for your immense pleasure. Or to your company to run tests of your zero gravity home appliance prototype for Mars mission (CEO told us they successfully tested oven and washing machine).

Extremely happy version of myself

Beyond amazing, and very difficult to describe (which does not prevent me to write looong text about it – which you can skip and just look at pictures and watch the video).

The closest legal thing I could compare it to is ASMR, but it’s not close enough. That moment of going from 1.8 G to zero G … I’ll never forget that feeling, and I’ll keep reminding myself of it.

It’s also a bit stressful. We got 15 parabolas (1x Mars gravity, 2x Moon gravity, 12x zero gravity), which sounds like a lot but doesn’t feel enough. Each of them is 15-25 seconds only. You barely figure out what is happening, and you hear “Feet down, coming out!”.

After a few parabolas I started using way up to recompose and bring some mindfulness, but with transition to zero G I decomposed back and amygdala took over, especially when crew made us do tricks.

We flew like Supermen, ran like hamsters in a wheel (watch the video), tried catching floating sweets or blobs of water. Everyone smiled ecstatically. Customers and crew alike. If you don’t trust me, look at these pictures. Yes, even Stephen Hawking was smiling. And happy Elon Musk is there as well.

Finally, during the last two parabolas I managed to stay aware. It was wonderful.

Then it was over.
I think even pilot wanted to do more, but it’s hard to say.

We sat near each other, but only talked in a few bursts and then went back inside our heads where beautiful things were happening.

I realized that the crew might not even be paid. At least I would do it for free, any time.

I remember that as we went out of the plane we got our certificates, our name tags were turned to celebrate the first zero g experience, and I guess we walked back. I don’t remember what we were talking afterwards when eating “lunch”. Our frequent flyer Jim offered to drive me closer to where I was staying. We discussed weightlessness and skydiving, blockchain and new technologies, and where the economy is going, and he dropped me off in front of Whole Foods. I bought cherries and blueberries, took Lyft to my AirBnb place, closed the door, dropped my bags and started jumping around. I didn’t go anywhere that day.

24 hours later, I was still smiling (except for those 15 minutes when I was persuading myself to talk to strangers because I wanted to join my first acroyoga jam). Even now I’m smiling as I write this.

In a way, experiencing this is a bit related to Tim Ferriss. I was considering not going this time, because I wanted to experience this with my husband Tomas and he couldn’t join me. But I talked to my friend Juraj (who did it before, and also gave me 4HB many years ago), and I remember Tony Robbins saying something along the lines “Now is the favorite word. If you’re in doubt, do it NOW”.

So I went. I’m very happy that I did that, and I also know that I very much want to experience it with Tomas as well.

I loved the zero gravity experience with my whole being. And it makes me dream big again. Private space travel is not too far. I just need to keep myself healthy and accumulate enough wealth. I will always remember the feeling of weightlessness, and it will give me the right focus. Big things are possible.

But enough of me being all hyped up. I’m reporting back to service with Titan Experiment. 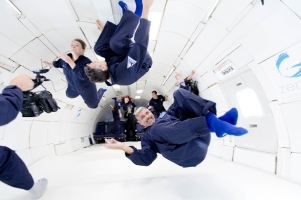 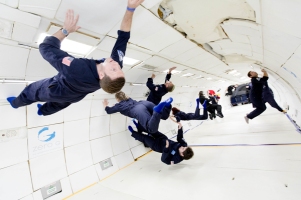